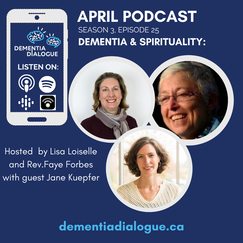 Resources for this episode can be found under the following sections on our resource page:
-Spirituality and Dementia